Have you noticed before how much music is used in films, television programs and adverts? If you were to mute the sound and watch these things with only subtitles you’d have a very different experience. Scary films aren’t so scary without the tense music that accompany them, and romance scenes aren’t as tender without the mushy orchestra sounds in the background. That’s because music has a huge impact on our emotions.

Since starting Music Appreciation Sunday 15 weeks ago, we’ve heard a lot of different music. I’m sure that each of you have had different responses to the music – a few of you have even been in touch to let me know how Clara Schumann’s Piano Romances made you feel emotional, how John Cage’s Prepared Piano made you feel anxious, and how Gershwin’s Rhapsody in Blue made you dance around the living room! So let’s take a look today at the reason why music has such a big affect on us. 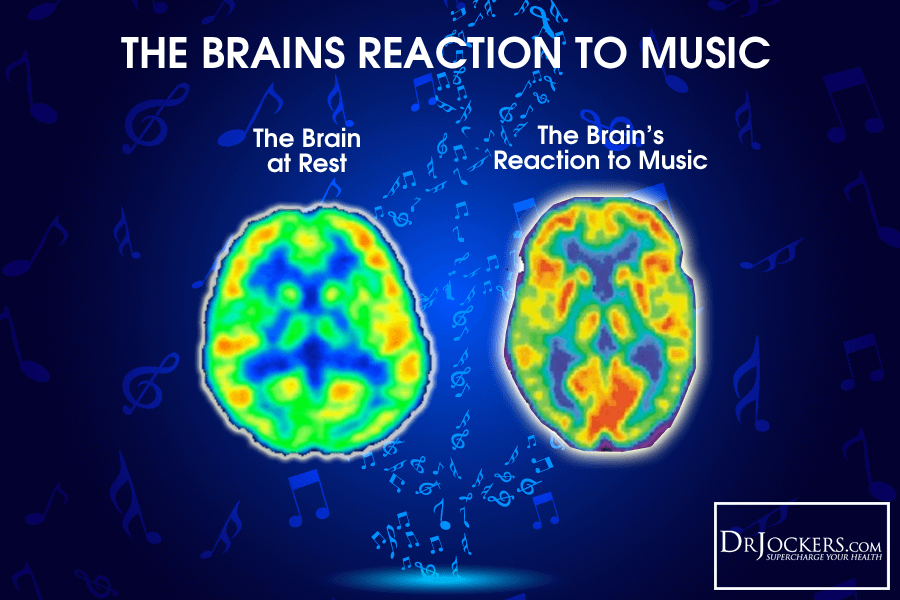 Music affects the brain in a very unique way. Instead of being processed in one particular area of the brain, music is processed everywhere! Take a careful look at the image above. On the left we see the brain at rest, and on the right, we can see the brain’s response to music.

We can immediately see that there is much more activation, and it’s spread across the entire brain. Music is hitting regions in the brain that are considered the core of emotional processing, as well as hitting motor regions, cognitive regions and speech and language centres.

Music is so powerful that our brains continue to react and respond to it, long after other brain functions have declined.

This is most apparent in elderly people with dementia. When listening to familiar music, dementia patients are able to recall memories triggered by the music, whether it’s a hymn from their wedding or a song that they danced to. Not only that, if they learned the piano as a child, they are still capable of playing because playing has become a muscle memory. How amazing that we are able to have a life-long appreciation of music.

Watch the video below to see a lady with dementia who is 102 years old, and is still able to perfectly recall and play music, despite having an attention span of 3 seconds.

Calling all subscribers, if you would like to share your playing please let me know. I’d love to feature it here.

Jen gained a BA degree in Music from Oxford University, where she also held a choral scholarship. She has a keen interest in academic Music, and studied for a Masters in Musicology at the University of Durham, obtaining a distinction.